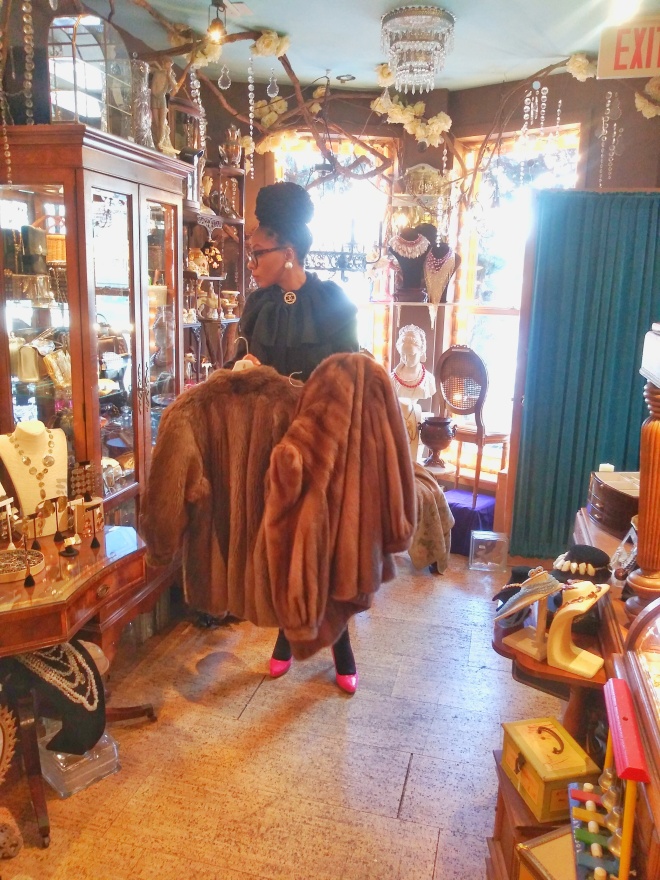 Death Becomes Her: Why I Always Find Deals on Designer Goods

I could feel my heart beating in my ears.

My overly moisturized hands (I have pretty intense texture issues, I only use petroleum jelly on my hands) were clammy. I could barely part my lips I was so taken aback, with the alert I had just received.

There was only one person who could instantly help me sort through these complex emotions. I took a shot of espresso and chased it with a swig of sparkling water before calling an urgent session with my; TED talk giving, magazine cover gracing, #lifegoals, YAY-partner in life, mentor, sister-from-another-mister.

The moment she saw me, she could see the intensity in my eyes.

“What’s wrong” she gasped as she put down her phone.

“I just got a monogram Louis Vuitton Neverfull GM for less than the price of trois months of grande coconut milk cappuccinos.”

“Because the designer deities continue to pour blessings unto me.” I shrieked.

I have never witnessed her laugh so hard.

But this was no a joking matter (tee hee.)

I have been indisputably favored by the design deities.

And I know EXACTLY why.

It was during my second week as an apprentice, at the poshest funeral home in Washington D.C.  I was nervous beyond belief.  At any moment we could receive a call to prepare the remains of a Senator, Ambassador or professional athlete.  I skittishly moved about the preparation room, trying to remain productive and poised.  And then it happened. We received a removal call.

In a short span of time, I’d grown fond of going on removal calls. While on these calls I always felt as though I’d walked into an Architectural Digest magazine.  The homes of the families we served were often featured in international design and interior publications.  Their walls were adorned with original Warhol’s. Fabergé eggs rested atop argar wood tables. African geese swam in the ponds of their estate.

After completing the burial arrangements with the next of kin, a relative then summoned the house staff to retrieve the mistress of la mansion burial garments.  When the chambermaid (is that politically correct? If not, I’m going to be so upset.  I’ve never been near a tax bracket to use that term in a conversation) returned with the requested garments in tow, I nearly lost my life from the violent gasp I inhaled.

As I un-clutched my plastic pearl inspired necklace (this was long before my days of affording salt water pearls) the house staff (just in case chambermaid isn’t politically correct) placed le noir et blanc classic CHANEL suit in my custody.

At this point in my life I had never seen anything CHANEL outside of a store with armed guards.  And this woman, without hesitation laid a custom tailored, made in France CHANEL suit against my polyester blend (sigh) suit separate.

I was the only woman embalmer in the funeral home.  No one understood my sheer excitement to prepare and dress our new “guest.”

The next day I returned to dress our “guest.”  I was beyond discouraged that I couldn’t get the suit to cooperate.  Reluctantly, I asked the lead embalmer to assist me with this process.  He looked over at my table and irritably replied “just cut the back of the jacket.”

“JUST CUT THE BACK OF THE JACKET?”

Until then, I had NEVER raised my voice, or questioned ANYTHING my supervisor said to me.  But I knew then, if I didn’t stand for something, I would fall for ANYTHING.

Suede CHANEL hanger in clinched hand, arms flailing back and forth I said “No.  No, I will NOT cut the back of THIS jacket.”

I felt so proud.  So accomplished.  So empowered.

I’ll admit, I was expecting the quintessential movie; woman enters male dominated field and “stands up for her rights” slow clap.

It didn’t happen.  He just left.

And I had to figure out how to dress this woman of stature and influence, without “just cutting the back.”

“That’s just rigor mortis” is what I convinced myself, to justify that cracking sound.

I got the suit on though, uncut.

From that day on, I have ALWAYS experienced divine favor.

Below are a FEW of the unbelievable deals that I have “received” from the highest designer deity:

Burberry Raincoat : Gift from a client

Until this day I wonder; had I “just cut the back of the jacket” would I be forever cursed?

Banished to the land of paying retail for my beloved LV, CHANEL and YSL?

I’d love to hear about your designer deals or ones that got away.

Don't mind me.
Trust me; your life isn't over...
Because the FIRST will never be last. Une petite leçon d'histoire.
Ungrateful Minority Influencer.
Venti Carmel Macchiato...
Around the Girl. 2.0
Loading Comments...
Comment
×
%d bloggers like this: